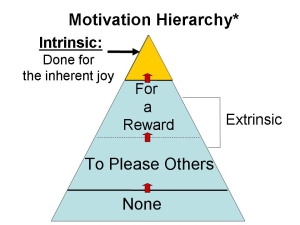 Over time we have worked with thousands of students in Connecticut. Through our work, we have figured out a step-by-step approach to motivating our students.

We know that identifying some of the bigger motivational issues is often the first step towards changing self-direction.

While there are numerous subtleties and nuances beyond the descriptions below, we think it is helpful to identify some of the largest challenges and describe how we try to effect change.

Your Student-Child Is Not You

The inability of parents to motivate their student-children due to the different psychological and personal structures of the parent and student.

Everyone is different. We can all agree that every individual is unique, with a distinct personality.

Yet many parents act as though their child should have exactly the same motivations as themselves.

“When I was your age…” the parent lectures, and then describes what motivated her when she was the same age as her child.

“We didn’t raise you to think this way” is another battle-cry of the weary parent who doesn’t understand that their child is simply different than Mom and Dad.

There are different psychological structures and personality preferences that transcend both nature and nurture. At The Learning Consultants, we cut through this thicket of misunderstanding and miscommunication by identifying these differences and then attempting to hit the motivational triggers that seem to be common for each structure and preference.

We derive our understanding through interviewing techniques, personality profiling systems, and intuition based on years of experience working with students.

While the complexity of our motivational system is too intricate to convey here, the bottom line is that we identify the personality/psychological blueprint of the youngster and then use techniques appropriate for their unique persona.

Here is an example:

In one of the profiling systems that we use, there is a type that we can call, for simplicity’s sake, The Adventurer. As the moniker suggests, such students are in need of high stimulus. Structured school settings often pose a challenge to Adventurers.

There are certain challenges that face Adventurers more profoundly than others (feelings of confinement, desire for freedom, need to do their own thing).

But there are also motivational trigger points that affect Adventurers more than others (the excitement of options, competition, intensity).

At The Learning Consultants, we link excelling at school to students’ motivational triggers, (i.e. doing well at school will give you more options for fun in college) in order to move their thinking. That shift in perspective leads to results.

The Future Is Not Now

The inability of the parent to motivate their student-child because the abstract future means little to the student-child’s present reality.

“What am I going to do this weekend?” is often about as far into the future as many high school students think.

Many parents lament that their kids “don’t get it.” The worry that their children don’t know what the real world will bring even though “we’ve told them a million times.”

At another level, many parents do not understand that the methods they have used to convey the potential pitfalls of doing poorly in school simply do not penetrate to the here-and-now reality of being an adolescent.

You can tell a teenager that someday they will “want to get a good job,” but when the teenager is presently enjoying himself playing video-games and hanging out with his friends, that message lacks any emotional impact.

If you think this is a uniquely adolescent problem, take a look at most adults (your friends, too) and the near-term pleasures that eating provides. The potential (and likelihood) of getting ill sometime in the future does not seem to penetrate when someone is enjoying a delicious meal loaded with all sorts unhealthful ingredients.

Perhaps smarter eaters may look at us similarly to the way we look at our teen students — “Why are you acting this way? Don’t you understand what you are doing to yourself?”

The issue is how to make future consequences more emotionally present for young people. This is not easy. Most of our methods are proprietary in nature and some part of the work is more art than science. But at The Learning Consultants, we get results.

For example, we have our students dialogue with their older/wiser selves. The key to the exercise is that the hypothetical conversation is not with their parents or even with us as teachers, but rather with their own imagined version of themselves several years in the future. (As a side note, many students, due to virtual reality video games, are actually skilled at creating different versions of themselves.)

Once the 14-year-old student has locked into a vision of their 17-year-old self, the conversation begins. With some, the impact is dramatic. We have had several freshman and sophomores have mini-epiphanies: “I am hurting myself by messing up now.” The metaphor that comes to mind is of a young smoker meeting an old smoker on a ventilator. The shocking image can immediately change behavior and get them to quit smoking.

Some students state what seems obvious: “I want to be considered successful and success will involve going to a good college.” The key is not the statement, since their parent has likely said the same thing to the them on countless occasions, but rather the source of the statement — the students themselves.

We use numerous techniques and activities, based on the student and what fits their personality, to help shift the length of goal orientation from the present to the future.

Why Do I Need to Learn this Stuff?

The Disconnect Between School And Career

Many parents report that their student/children are unmotivated because they fail to see the connection between what they are doing in school and what they will do in the future.

Many students simply cannot seem to get themselves engaged in work unrelated to their long-term goals.

We change the motivational energy of students simply by honing their understanding of where they want to end up.

For example, we recently worked with a very smart but highly unmotivated high school freshman at Guilford High School.

He loved building stuff. He hated school busy-work. While he would not frame the issue in this way, we understood that he was motivated by the tangible — things he could build — and not motivated by the intangible, such as his English papers.

We put him into our Young Adult Career Mastery Program and could quickly see that engineering was of distinct interest to him. He was immediately energized by the thought that he could get paid to spend time creating mechanical devices or working in the field of robotics.

We identified the types of companies that worked on cutting-edge technological development. The student was intrigued. We then looked at the backgrounds of the engineers who worked at some of these companies: M.I.T, Cal-Tech, Johns Hopkins and other elite schools seemed to consistently be part of their profiles.

We then examined the criteria for admission at schools of this caliber.

We said nothing more. The student immediately noted that his Cs in English would doom his chances of doing what he loved in the future. His attitude toward school changed radically.  He won several student awards at Guilford High School.