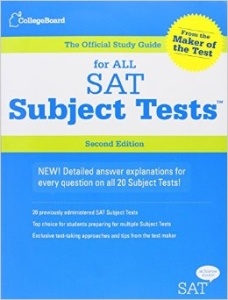 What Should I Know About the SAT IIs?

Assuming that your child is taking the SAT IIs, the first question asked by parents is, What tests should my child take?

There are numerous variations within the following subject categories, but generally speaking, students can take Math, Science, Language, Literature, and History tests.

To analyze the issue, there are two important questions: 1) The tests that provide the student the best opportunity to score well, and 2) the test types that are required or preferred by the student’s colleges of interest.

For example, some students excel in the liberal arts areas and would perform better in literature and history. But, many schools prefer or require a “quantitative” test.

Only math and some science (chemistry or physics) are categorized as quantitative.

Conversely, some students excel in math but are applying to universities that prefer or require a non-quantitative test, such as literature, history or languages.

Choosing Which Tests to Take

The Learning Consultants often provides diagnostic tests to figure out which tests each student should take.

For example, we recently spent some time in SAT II test prep with a talented student from Essex, CT who attends Valley Regional High School. She had the enviable problem of being excellent at several subjects. The challenge was figuring out which SAT IIs she should take given her multiple talents.

We were fairly confident that she would take both the Literature and History SAT IIs. Diagnostic testing confirmed that these were her strengths.

Since many schools wanted a quantitative subject, as well (such as math or a science with a mathematical component like physics or chemistry), she focused on chemistry. This was a class where she had straight As.

Upon diagnostic testing, we realized that despite her scholastic strength in chemistry, she probably would not fare well in the SAT II chemistry test. Simply put, she was really a reading/history type who happened to be smart enough to do well in all subjects. While she had good grades in chemistry, she actually had not retained the material well enough. Her top grades were based in part on her extra credit, her ability to memorize material for tests, and her teacher’s fondness for her.

We prepare students with rigor because students underestimate how challenging and how important these tests are for admission.

For example, there are several students we work with from The Williams School, in New London, CT. Williams is a fantastic school and its students are generally prepared exceptionally well. The students, as a rule, are very busy. Great academics and great activities create a wonderfully rigorous atmosphere for Williams’ students. On occasion, some of the students are too busy to spend time adequately preparing for SAT IIs.

A few years ago, we worked with a student from The Williams School. He was an outstanding math student, so he assumed that he would do well on the Math I SAT test without much test prep or tutoring. He didn’t!

We got together for the second go-around, prepared for the SAT II with rigor, and he scored well into the 700s.

In choosing which tests to take, there is one general rule:

If your student-child is taking an Advanced Placement (AP) course and is taking the AP exam in the spring of junior year, then it usually makes sense to take the SAT II subject test in the same subject.

For example, if your student-child is taking AP US History, it probably makes sense to take the SAT II in US History around the same time. In this way, the student can study most of the same material in order to take both tests.

There are some subtleties that students should know as they sort through their options. Here’s our advice.

First, your high school should have records of past test-takers in your subject area, giving you valuable insight as to how strong your particular school (or teachers within the school) are at teaching that subject.

We know of one Shoreline school where the sciences are exceptionally strong, helping their students do very well on the chemistry and physics AP exams. But within the same school, their language department, particularly Spanish, is weak. Even their strongest students perform poorly on the Spanish SAT II.

Second, you should realize that some aspects of the SAT II subject tests have surprising elements and require preparation. For example, the English Literature test is not simply a hard SAT reading comprehension test, but also one that requires an ability to deconstruct poetry and old literature.

Fourth, some language tests are extremely hard to score well on due to the preponderance of native speakers who take the test. This has become a clear issue not only in Spanish, but also in languages such as Korean and Chinese.

Understanding how well students in your child’s school have performed on a particular language test will help you understand whether this factor will be a handicap.

Fifth, realize that every college has different standards.  You must precisely find out how many SAT IIs each college requires and realize that most do not require SAT IIs.

Finally, if your student-child is applying to highly competitive colleges, you should understand that these schools take the SAT IIs very seriously. Scoring below 600 on the tests could severely hinder a candidate, while scoring in the 700s is probably necessary on at least some of the tests.