When to Prep for the SAT 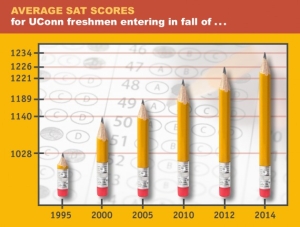 When To Begin Test Prep

If you have received generic advice on this question or on most other questions related to college admission, you are likely not getting an answer that adequately addresses your personal situation.

When asked by a parent about when to begin prep, certain advisors have a pat answer based on whatever philosophy they espouse. To be clear, many of the college counselors and guidance counselors in the Shoreline, CT area are outstanding. But, most are not expert in the area of test prep.

Instead, we ask questions about YOUR CHILD.

The initial question relates to the student’s college aspirations.

While precise answers are not necessary, such as the exact colleges the student is examining, usually parents have a general feel as to whether the student will aspire to selective, highly selective, or most selective colleges.

The PSAT from either sophomore or junior year provides a wonderful diagnostic test.

If not, then other standardized tests and perhaps general performance on big tests are useful in helping to assess the situation.

Follow-up questions relate to the student’s mindset and schedule. Its certainly helpful if the student has begun to think about colleges. In addition, the busyness of sports and other activities during certain seasons makes the question of when to prep a logistical as well as pedagogical question.

The issue of when to prep (and how much to prep) revolves around the “gap” between the student’s goals and the student’s present score,measured largely by PSAT results.

The larger the gap, the earlier to begin.

We have had great success with students who start before junior year or at least in the fall of junior year, rather than the more common start in the winter/spring of junior year.

For those who need substantial improvement, the process evolves as follows:

The student begins prep prior to the junior year PSAT. During that period, the student has their first jump in score as measured by practice testing.

The student takes the PSAT in a more confident state and does better than expected (based on improvement from a sophomore PSAT or similar diagnostic testing).

The student now knows for a fact that improvement is possible. This mindset is a significant positive as we move forward

In contrast, most students who do not like standardized tests do not prep prior to the junior year PSAT.

They take the test cold. The following consequences naturally unfold: they feel confused and frustrated while taking the PSAT; they perform poorly; and they develop a negative mindset going forward.

The impact of that last fact can not be underestimated. When students believe that they are “bad test-takers”, they typically work less and create a self-fulfilling prophecy for the real test.

Back to our initial student who began prep early…

The student who improved prior to the junior year PSAT is now at least reasonably confident about test-taking.

This confidence helps create the energy to prep for the real test.

While there is usually a bit of plateau in practice scores for a period of time after the PSAT, a second jump usually occurs prior to the first real SAT.

That second jump demonstrates the wisdom of the early start.

Instead of having the helpful single jump that test prep usually provides, the student bumps up twice.

That often is the difference between a mediocre and a good score.

But, everyone is different…

While we have had wonderful results with early starters, not everyone needs to start early.

Occasionally, we will meet students who have a PSAT score that is generally in line with scores required by the highest schools of their interest.

They also might be busy in the summer and the fall.

For them, starting in the winter/spring is totally fine.

The issue revolves around you and YOUR CHILD.

Ask questions that pertain to your situation.

YOUR CHILD is all that matters.

For example, we recently met with a student from Madison, CT who was seeking test prep help. She had been told to take the test once in May and then once again October.

That advice worked for students about ten years ago.

But, the student wanted to apply to Wake Forest which has a relatively unique early admissions program. Some students can find out as early as September whether they will be admitted. For that reason, students need to have the highest possible scores prior to the fall.

Many students have a relatively weak first test due to the grueling nature of the exam.

In this case, the student did prepare for March but not as much as she would have liked because she was heavily involved with the winter musical.

For that reason, her first test results were not particularly high.

She prepared in earnest thereafter and did amazingly well on the May exam.

We also engaged in SAT test prep recently with a student from East Lyme High School. The student had ambitious goals. He eventually wanted to head to medical school. His PSAT scores were far lower than those required by some of the schools
that had excellent pre-med programs.

He created a customized test prep group for him and his buddies in East Lyme immediately after he had obtained his first set of PSAT scores. By January, he had jumped nearly 100 points in the Math SAT and roughly 50 points in Reading SAT based on his diagnostic tests from the College Board’s released SAT tests.

He was happy with his score but wanted better results for the March, SAT. After his customized test prep group ended in East Lyme, he continued with individual SAT test prep in our offices in Old Saybrook, CT.