Anxiety and test taking: our course will forever change your child 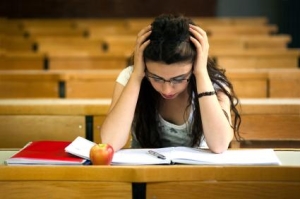 of the GRE – can you believe it?” Marissa wrote in an e-mail seeking help for graduate school. I first worked with Marissa when she was an SAT student in my Madison class. She was terrified of big tests. She had created a story that she was terrible at tests based on hearing that she underperformed on the Connecticut mastery tests of years ago. Her PSAT as a sophomore confirmed her suspicion that she was a bad test taker.

At the start of each SAT class, I ask students to provide any information that will help me help them. Marissa had written: “I’m just bad at tests and will probably be horrible at the SATs.” During SAT class, I provide a full lecture on the psychological performance of test taking. Psychological issues related to test-taking are a highly underrated issue. Marissa had mentioned way back when that she felt a little better after the lecture.

After our SAT class had ended, Marissa and I reconnected for individual SAT prep. We directly confronted her fears and I identified her particular issue: she is a perfectionist (Enneagram Type 1). Far more than others, she really hated the thought that she could be “wrong.” Indeed, her whole life was governed in a positive way by trying to do the “right” thing but occasionally crippled when worried about doing the “wrong” thing. This trait prevented her from educated guessing and keeping pace, two critical elements of successful SAT testing. It was not easy but over time Marissa overcame her test-taking challenges. I delightedly reconnected with her again for graduate school testing.

As is the case with most areas, test-taking can be trained.  Our course trains students in all areas of the test including the psychological areas,  It will be a life changing experience for some.