College Preparation: What We Can Learn From the WWII Generation 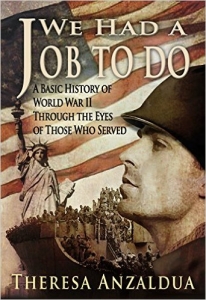 I had the pleasure of being interviewed by Theresa Anzaldua.  She is a journalist for Seasons magazine and a writer of the highly praised book We Had A Job To Do, a book about World War II veterans.

I mentioned that one of my mini-lectures that I give to students in our Old Saybrook and Madison SAT classes is inspired by World War II veterans.  The challenges that Connecticut high school students face from college preparation often create intense stress. Much of the stress comes directly or indirectly from parents. But that is a subject for another lecture.  Perspective goes a long way towards alleviating such stress.

Young men, not much older than Connecticut high school juniors and seniors, entered World War II.  Today’s wars are horrible. I don’t mean to diminish the dangers faced by anyone in the armed force.  But yesterday’s wars were far more likely to lead to death. 18 year olds joined the military knowing that there was a reasonable chance that they would die.  Those men storming the beach in Normandy ran into massive amounts of gun fire.

If you could take the perspective of a World War II soldier and place it into a Connecticut student applying to college, you would realize that our challenges are pale in comparison. If SAT prep, AP exams, and college essays are our children’s biggest problems, we are very lucky.