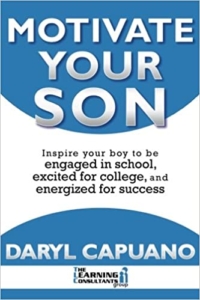 “He’s given more thought to mastering Call of Duty than which colleges interest him.”  Terry, a mother of a student from Lyme-Old Lyme High School, in Old Lyme, Connecticut, lamented as she described her son Liam.    Since I wrote Motivate Your Son, I am often the last resort for parents (often mothers!) who are their wits end in trying to motivate their boys.  Since college counseling is the primary way to motivate boys (and girls) in relation something tangible, I think my next book could be Motivate Your Son for College!

When I met Liam, we got along well.  He’s a likable guy and I know my first job is to build rapport. So after he felt like we had built some trust, he actually brought up the subject at hand: “my mom is really nagging me about college.”

One thing that law school ingrained in me is the power of the Socratic method:

“Why do you think she is nagging you about college?”

And so it went as I continued asking Liam questions based on his answers until Liam was telling me that college was his first major life choice and that it would set him up in significant ways after college.