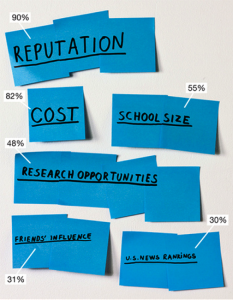 College Case Study: This is a real world college decision made by a friend of a friend who lives in Fairfield County. The father in question’s daughter was admitted to Northwestern and Penn State. The friend lives in Pennsylvania so this decision is similar to considering Northwestern versus UCONN.

The parents could broadly be described as “upper middle” by suburban Connecticut standards (even though they likely are upper-upper by standards across the nation).

They have saved $125,000 for college for their daughter.  They have two other kids who are college bound and need to save all additional college funds for those two children. The daughter wants to attend Northwestern.  Total cost will be in the $240-260,000 range. Penn State will basically be covered by the current college savings.

This seems to be the dilemma that is faced by many parents: should we spend more money on a high priced private school, particularly an elite one like Northwestern and/or have the college bound child take out loans.  In this instance, the issue is complicated by the fact that the daughter will be studying theatre. This cuts both ways.  From a practical standpoint, it makes no sense to spend an additional $120,000 plus for a private education on something so impractical.  But Northwestern has among the best programs in the country for theatre so there is some thought to “go for the top” if one is going to do something impractical. In other words, if you are going to play music for a living then there is an argument to spend the money on Juilliard instead of Southern CT.

Ultimately, the parents left it to the child to decide.  She decided on Northwestern. Her parents will give her $125,000 and she will take out loans for the rest.

What decision would you make?